29TH FEBRUARY: BACK TO BIRMINGHAM

On 29th February, I visited Birmingham for the first time since I left my job there 12 years ago as Head of the School of Architecture.  That was a dreadful job, in what I thought at the time was a dreadful place, and I believed that this opportunity to accompany the Bristol school of architecture's second year students would allow me to get a feel for how things have been going.

Down-at-heel cities, wherever they are, love 'iconic' architecture by so-called 'starchitects' to make them feel good, so I thought a visit to the new library, followed by a walk to the refurbished New Street Station would help me to reappraise my opinions of the place.

Quite the opposite - it reinforced them.

We started with that new library.  Escalators and whizzy travelators; soaring views upwards; a fully glazed lift that didn't work - and a facade that is more about catching the eye for a moment or two, rather than engaged contemplation: this is what I remember of it.
We arrived armed with architectural plans - and these revealed the simplicity of the concept.  It's a box with a straightforward grid of concrete columns, in the centre of which is a void made of circles in the floor slabs, each set in a slightly different position, to give, I suppose, a sense of 'drama' or 'interest'.  Further up the building, a circle of steel columns supports an array of book racks on a number of levels.  I agree, it gives a sense of gravitas: this is a real library, rather like Labrouste's Bibliotheque Nationale of the 1860s - but why all those cantilevers and clumsy clashes of circular and orthogonal geometry? 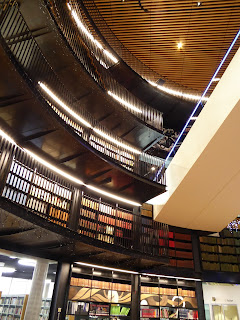 There are two highlights in this building:  one is the 'Shakespeare Memorial Room' of 1882, which has been faithfully reconstructed on an upper floor: 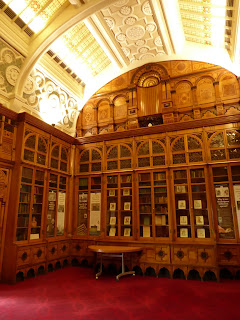 ... the other is the high-level roof terrace, which commands a fine view over the City - which excludes the building we are currently on.
Nearby we saw John Madin's Brutalist Library of 1973 being pecked away by the demolition team.
That the new library is an architectural improvement on the one of 40 years ago is not an easy argument to make - not when you actually start to think about it. 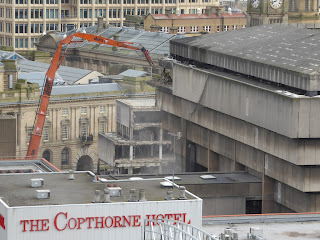 Get a piece of Brutalist architecture; fail to look after it properly, and it replace it with a fashionably expensive new building that has yet to stand the test of time.  Madin's masterpiece bites the dust, as viewed from its replacement

We set off by foot across the city to New Street Station.  We went down to Gas Street Basin, with some of its pitifully worn early PostModern stuff, and entered the Mail Box - the conversion of the old sorting office into a commercial and retail centre.  It's easy enough to get in - you'd almost think it was public.  But as soon as the students started taking photos, the uniformed 'Security Services' were down on us:.  "You need to have permission to take pictures" we were told.  Messages were sent to 'Control' - We had forgotten that Birmingham is the Privatised Space Capital of Britain.

And so, beneath the underpass, to New Street Station.  We were alerted to something being very architecturally wrong when we saw the vulgar, cheap, and utterly sub-Gherian (if that is possible) reflective tin cladding on the outside of what has been ludicrously renamed 'Grand Central' (presumably, I imagine, after the 1871 Grand Central Terminal of New York - are they being serious?).
We made our way in to find the grand central space, in which a hole has been carved out of the old roof to let some much needed natural light in.
We saw some very sub-Calatravan arches, fashionably leaning against each other, trying hard to look like they were concrete, but actually covered in some sort of white fabric.  This was value engineering carried to new lows.
We read the description of the building from a website called ArchDaily ("the world's most visited architecture website") - God help us that students think this is good writing - for this is the complete twaddle that we read:

The geometries of motion and the distortion of perception produced by movement have been the inspiration for the architectural expression of the project.  The bifurcating, undulating, smooth forms of the track field [whaat?] have been transferred and embedded into the geometry of the building to ornate the city and convey its historical character as a transportation hub, where various traffic systems - such as the famous canals, the roman roads etc. converge and overlay ... [and so on]

This guff is really out there for people to read and believe.

This is what the 'architectural expression' of the project is really about: 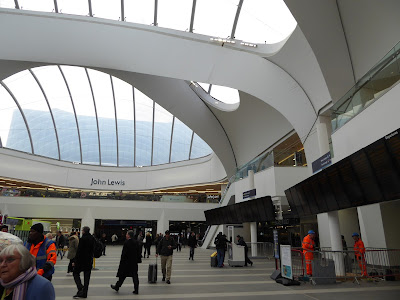 Those 'arches' are actually draped in fabric

The transparent pneumatic roof, which is really what keeps the rain out, was what interested us, but its workings were hidden behind the sinuous white nonsense.  The lack of attention to detail was breathtaking: stay-wires pierced the fabric seemingly at random; columns when knocked proved to be made of board.

We left 'Grand Central' in serious need of lunch and a drink.  We were trying to find a small, independent caff, but there were none to be found.  Corporate Private-Space Grand-Central Birmingham doesn't seem to accommodate such things.

We thankfully found our coach to return to Bristol.

Thank goodness I left Birmingham when I did.